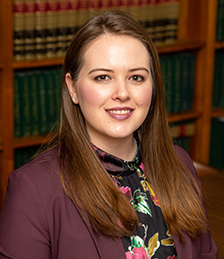 Taylor Briggs, Esq., began working for Santanasto Law in January of 2019 as a Law Clerk while finishing her last semester of law school at American University – Washington College of Law. Attorney Briggs graduated from American University – Washington College of Law with a Juris Doctor in May of 2019 and took up full-time employment with Santanasto Law. Attorney Briggs practices primarily in the Wills, Trusts, and Estates group. Her secondary practice areas include Real Estate, Business, and Civil Litigation.

Attorney Briggs previously worked as a Law Clerk for an asylum immigration firm in Washington, DC, from June of 2017 to October of 2018. In this position, she helped children and women fleeing persecution and systemic violence in their home countries by drafting asylum petitions and other complex immigration petitions. Briggs also volunteered as a Court Advocate for Turning Point of Lehigh Valley from the Summer of 2015 to Spring of 2016.

Attorney Briggs is very familiar with the Lehigh Valley as she attended Lehigh University as an undergraduate. Briggs graduated from Lehigh University in May of 2016 with a double major in History and Political Science. She also earned a minor in Asian Studies.

Attorney Briggs is originally from Minnesota where she grew up riding horses and working for her parents’ marina and boat dealership. She attended the prestigious Blake School in Minneapolis, Minnesota, renowned for its national-level debate program. Briggs was the captain of Blake’s debate team and qualified for both The National Championship and The Tournament of Champions two years in a row.

In her free time, Briggs enjoys skiing, golfing, and being on the water.